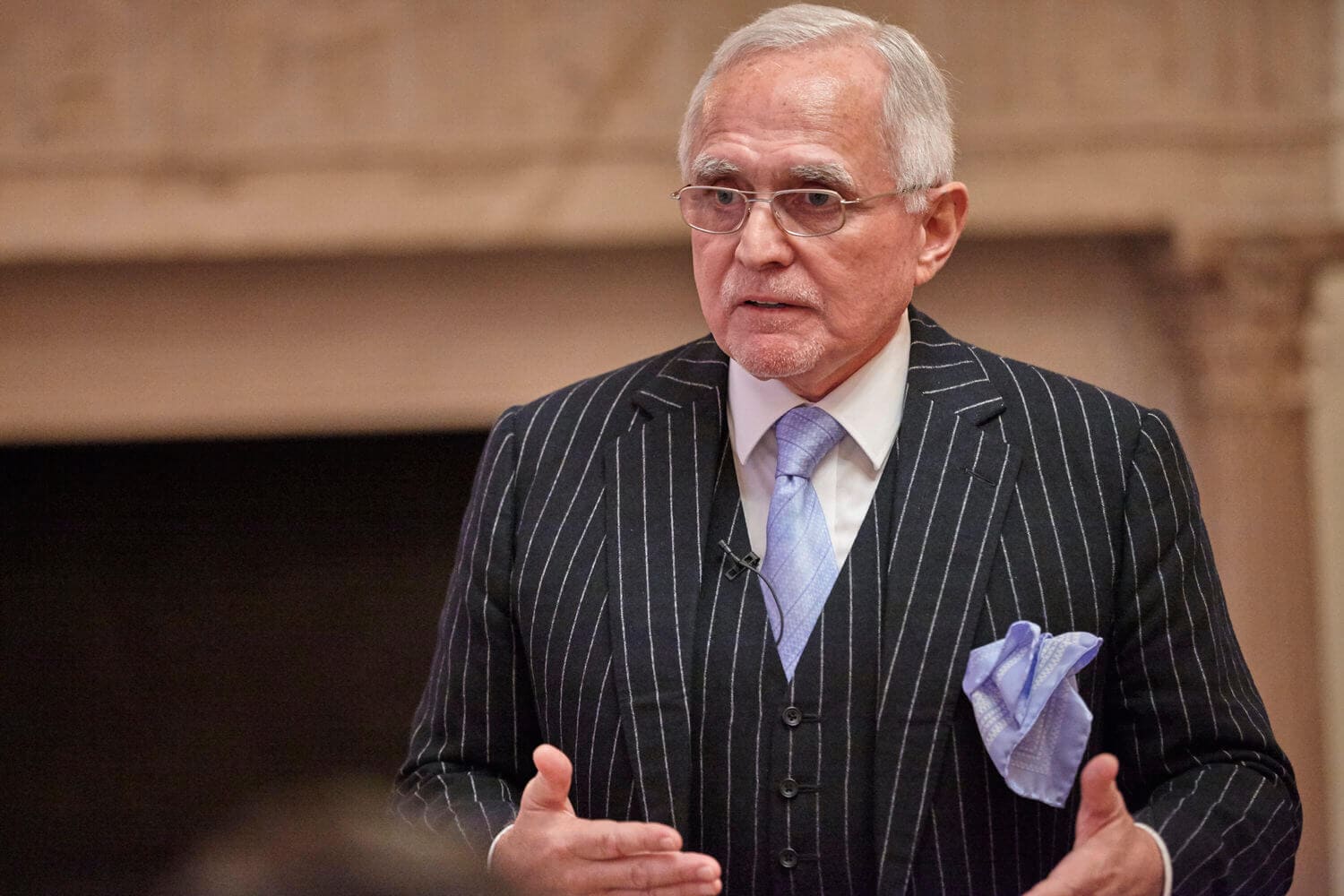 How much is Dan Pena’s Net Worth?

Dan Pena’s net worth is projected at around $500 million. He is known as the ‘Trillion-dollar Man’ because of his ability to make millionaires. He is one of the most successful business coaches of the modern era. According to his website, he has mentored many business tycoons who now have a combined net worth of more than $5 trillion.

He is the founder of ‘The Quantum Leap Advantage,’ where he coaches entrepreneurs and budding business owners personally. He charges $25,000 for a week-long session at his Castle in Scotland.

Dan Pena owns a huge castle in Angus, Scotland. It is called the Guthrie Castle and was built in the later 15th century. It is spread over 160 acres and is more than 500 years old. Dan used to rent the Castle out for business and marriage events until 2017. Now, he lives there. The Castle is worth $25 million and a huge asset in his $500 million net worth.

Dan Pena’s net worth includes a massive fleet of cars and private jets. He owns several Ferrari cars and Rolls Royces cars. He also has a couple of private jets, which he regularly uses to fly between the countries.

Dan Pena’s Net Worth: How Was It Created?

Dan Pena’s net worth was created by making and selling successful companies. Dan Pena used to build companies in his former days, make them successful with his skills, and sell them out, making enormous profits. Dan Pena’s first prominent success came decades ago when he founded ‘Great Western Resources’ by investing $820. In the next eight years, the company’s worth spiked up to $430 million. Because of some concerns, he was ousted from his out company by the board members.

Dan Pena provides his consultancy services to entrepreneurs, businesses, and big corporates. He conducts private coaching too. One of his most successful ventures is the QLA, where he conducts a private seminar at his Castle. People pay over $25,000 to book a seat at this seminar. He also appears in a lot of podcasts over many platforms like iTunes, Spotify, and others. Dan has a YouTube Channel where he runs a series called ‘Dan’s Response to Bullshit.’ These ventures are constantly helping him to increase his net worth further.

Dan Pena is known for his excellent motivational speeches. Big corporates hire his consultation and public speaking services to impart valuable knowledge to their employees. Dan Pena’s net worth of $500 million is an accumulation of multiple ventures.

Let’s check out the growth in Dan Pena’s net worth over the last five years:

Dan Pena is an extremely successful businessman who has a net worth of over $500 million. Dan Pena was born on August 10, 1945, in Florida, the U.S. He graduated from San Fernando Valley State College – which is now called California State University in Northridge.

Dan Pena is known to have started and sold a variety of businesses in his prime days. He has also consulted a lot of industries. He has authored books, conducted seminars, and provided consultation services throughout his life. It is tough to find out the origin story of Dan Pena’s colossal net worth because he made most of it before the age of the Internet. His net worth involves huge assets in multiple irrevocable trusts.

One of Dan Pena’s very first significant successes is his former company ‘The Great Western Resources.’ Dan founded the company by investing $820, and it grew out to be worth $420 million within the next eight years. Dan took the company public and became the CEO and chairman of the company. In 1992, Dan was removed from the company’s positions by the board members. Dan filed a case and was paid $4 million from the company. He used this money as the seed investment for his other new ventures.

Dan Pena founded the Guthrie Group in 1997, and he is currently serving as its chairman. A significant part of Dan Pena’s net worth was made by his business coaching and consultations. He makes a lot of money through his podcasts. He has many sponsors for the podcasts he hosts on a number of platforms. Dan’s net worth also has minor contributions from his YouTube channel, where he uploaded his motivational videos.

Dan devised a ‘Quantum Leap Advantage’ methodology, where he sells high-priced seminars to interested businessmen and budding entrepreneurs. These seminars cost people over $25,000. Once you buy your slot, you’ll be invited to a week-long stay at Dan Pena’s private Castle in Scotland. That Castle is worth $25 million and was built in the 15th century. Dan got it renovated in the late 1900s.

Dan used to rent his Castle out for events and functions till 2017. From 2017 onwards, he stopped renting it out and started living there. He lives there with his wife, Sally Hall. They have three children named Kelly, Derrick, and Danny. Dan has a fleet of super expensive and luxurious cars. He has a couple of Ferraris and Rolls Royces. Dan also has a couple of private jets included in his net worth.

There are many reports of Dan Pena being a scammer. Some people say that he falsifies his net worth and misinforms people about his wealth. However, it won’t be easy to misquote one net worth for all these years. He visibly has a lot of money, and his lavish lifestyle is proof of it. If he wasn’t making this enormous amount of money, he couldn’t afford to live in a 1600 acre large ancient castle. His luxurious cars, private jets, real estate properties, and lavish lifestyle are the visible proof of how rich he is and what his net worth could be.

He likes to call himself ‘$50 billion man’ and ‘trillion-dollar man.’ No, he doesn’t have that much money in his net worth. He claims to have mentored multiple entrepreneurs to become millionaires and billionaires. According to him, the combined net worth of all the people he has mentored is more than $50 billion.

An American actress, and writer, Dorothy Faye Dunaway is popularly known as Faye Dunaway. She is famous for a starring…

“My goal is to make the viewers a little bit smarter,” said CNN Journalist Wolf Blitzer. Wolf Blitzer has been…

Georges St-Pierre Net Worth. Is he married to his wife?

Georges St-Pierre is a retired Canadian professional mixed martial artist. He is undoubtedly one of the best UFC fighters in…

Tristan Thompson Net Worth: How Rich is the NBA Player in 2021?