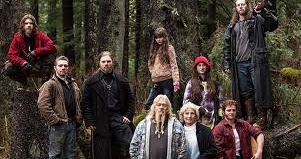 By now everyone’s heard Billy Brown’s Family on the Alaskan Bush People has been charged with multiple felonies over multiple years from falsifying applications for the Alaskan Permanent Fund Dividend check sent to all full-time residents. The family members were also charged with minor offenses for buying resident hunting, and fishing license’s when not meeting the requirements of the Alaska Department and Game to be considered full-time residents of the State. For a Reality TV Show going out of its way getting viewers to believe the Brown Family Kids have always been raised in the Alaskan Bush their entire lives, well let’s just say this doesn’t (at first glance) look good for the Show or the Discovery Channel.

Here’s why the Brown Family will be the very first Reality Show caught in a lie and proven to be fake, (as far the reality show is concerned) and yet will become even bigger Reality TV Stars as a result.

Billy Brown is currently facing 24 charges from the State of Alaska
along with charges for his wife Ami (Amora) Brown, and four of the children including Joshua (Bam-Bam) Brown, Solomon Brown, Gabrial Brown and Noah Brown. Neither of the two daughters Snowbird and Rain Drop, or the youngest son Bear Brown were charged with any crimes.

The Brown Family’s Attorney’s unsuccessfully tried plea bargaining the case down to Billy Brown and oldest son Joshua, would have each received two years probation and work 40 hours of community service. Billy also agreed to pay back $7956.00 to the Alaskan Permanent Fund, and Joshua agreed to pay back $1174,00 for his fine. Amy and the three other children’s charges would’ve been dismissed under the plea bargain agreement, but still required to pay $3000.00 and 20 hours of community service each. Interestingly, the Brown Family wasn’t at the courtroom held in Juneau, Alaska in person, but by phone sitting in Seattle, Washington some 1700 miles away.

The entire mess could’ve been resolved for the Brown’s a few days ago on Thursday, November 18, 2015, but the Judge rejected the plea bargain agreement sending the case back to square one. The Juneau Superior Court Judge Philip Pallenberg said in part, “The deal was too lenient and needed to include jail time to carry some teeth”. The Judge was also quoted saying “30 days in jail would be appropriate for the crime”. Billy Brown and his Family’s next scheduled hearing is in two weeks on December 3, 2015. Will Billy, his wife Amy and four of their children need to spend some time in jail to finally get this problem resolved? If the Judge has anything to say about it, they just might.

Once the Brown Family’s legal troubles are finally over, the big question is “can the Alaskan Bush People survive this type of news, or will the Show be canceled?” Will the Fan’s of the Show forgive the Brown’s for not really living in Alaska full-time? Or have they known all along this entire Reality Show is all based around one of Billy Brown’s Novels? It’s a story about a large Alaskan Family growing up in the Bush and surviving on their terms. It reads like a backwoods version of the Brady Bunch raising a large happy family where everyone always gets along. Sound Familiar?

The reality is, the Brown Family’s done such a terrific job playing their characters on The Alaskan Bush People that many viewers really thought this Show was the real deal. The over 150+ comments on the “Alaskan Bush People’s Net Worth” article proves the audience (at least to me) is very passionate about this Show. Everyone seems to have an opinion, both positive as well as the negative side. But the positive comments watching the Show for what it really is, (An Entertaining TV Show for the entire Family) overwhelming approve of the Brown Family even knowing most of the scenes are staged for TV.

Aside from the court case still pending, will the general public forgive the Alaskan Bush People now that everyone knows the Brown’s don’t live in Alaska full-time? Sure, it doesn’t look good by any stretch of the imagination, but is it really as bad as it first appears especially when you consider the date’s go all the way back before the Alaskan Bush People first aired on Discovery Channel?

Before the Brown’s became famous, the large family obviously was financially struggling to survive having nowhere near the net worth they have today. I’m not trying to dismiss the seriousness of the charges, but as a single dad raising two kids on my own, I certainly understand what it’s like putting their needs ahead of “anything else,” even if it was prolonging the inevitable for hopefully a better time.

Compared to other Reality TV scandals that brought the Show’s to an abrupt end, should the Alaskan Bush People be canceled just because the Brown Family doesn’t really live in Alaska full-time? IMO they need this thing settled the sooner. the better, and then get back to doing what the family does best, playing convincing roles of what it’s like living in the Alaskan Bush.

An American singer, songwriter, rapper, and former member of the R&B girls group Sista, Missy Elliott net worth is a…

You might wonder who actually, Jordyn Curet is as she has featured on several movies and TV series. Jordyn Curet…

Allen Devlin Biography Allen Devlin is an American journalist serving as a Breaking News Anchor and General Assignment Reporter. He…

Vishnu Priya TikTok (@Vishnupriya Nair): In this blog we are going to tell you each and every basic and possible…

Jay Z is the wealthiest musician and music producer in the world. Married to hit singer and icon Beyoncé, Jay…